This March 8th we are marking International Women’s Day with a homage to Women@thewell, a dedicated service for women set up by the Sisters of Mercy. International Women’s Day is a global celebration of the cultural, economic, social, and political achievements of women as well as a day calling for action for accelerating women’s equality. It all began with a gathering in 1911 and has since become a collective endeavour without ties to a particular group, country, or organisation.

Sisters of Mercy have historically focused on helping and empowering women by providing education and routes out of poverty. It is therefore fitting to celebrate today the work of Women@thewell.

A service for women by women

Women@thewell was developed by the Institute of Our Lady of Mercy (IOLM) to provide a uniquely holistic and multifaceted range of services to vulnerable women caught in multiple cycles of abuse and social exclusion. The concept of Women@thewell was built on 10 years’ experience of its founder Sister Lynda Dearlove. Sr Lynda had been working with women in the East-End area of London, the majority of whom were victims of street-based prostitution, homelessness, drugs & alcohol, violence, and both physical and mental ill-health. During her time spent with these women, Sister Lynda concluded that the broken up, “revolving doors”, approach of the existing services was not fit for purpose as it left many of the women unable to break out of the cycles of abuse. The bureaucracy of the system led to the women being seen by many people, at different institutions, at different times, thus lacking continuity and consistency in specialised support that was required.

Responding to a need for a new service dedicated to women, the Institute of Our Lady of Mercy (IOLM) funded the initial capital and revenue costs to get the Women@thewell project up and running. They found a suitable property, an old hotel in Birkenhead Street in Kings Cross, refurbished it, and set up a new independent, self-funding Charity called Women@thewell (w@w). 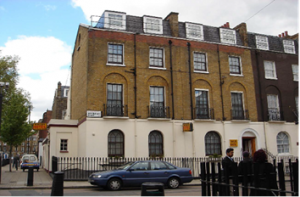 The IOLM began funding w@w for its first three years and retains ownership of the building and responsibility of its external maintenance and leases the premises rent free to w@w. The Centre was officially opened on 24 September 2007 by Cardinal Cormac Murphy O’Connor and one of the patrons of the Charity, Baroness Helena Kenneddy, QC. The Institute joined with the National Board of Catholic Women in this work.

Since the inception of w@w, many individual Sisters and communities have been involved in various ways. Srs Lynda Dearlove, Eileen Burns RIP, and Anne Hewitt formed the first community in 2006. Following the chapter of 2008 and Anne Hewitt’s election onto the Leadership Team, Camilla Hunt RIP took her place in the Community having already had experience of the situation in her role as Link Sister to the project. Sr Anne has since moved to a different community but Srs Dympna Reardon and Roisin Kelly joined in November 2010 and June 2011, respectively.

Various Sisters of Mercy have either served or are serving as Trustees to the project. Other Sisters have also lent their skills in various activities, one sister provides reflexology sessions and other Sisters have taken part in art and craft activities, amongst them Sr Dympna Reardon is a shining light and Sr Majella Sheridan from the Union Sisters of Mercy worked for several years in this field. In addition, Sisters from the following congregations work in a voluntary capacity: Dominicans, FCJs, La Sainte Union, Good Shepherd, Sacred Heart, Holy Child Jesus, Servites, Daughters of Sion, Loretta Sisters and the Order of St Giles.

The project has received support from Communities such as Eltham, Whitby, Colwyn Bay, Broughton Hall, Brighton, Filey, Oldham, and Wanstead, just to name a few. Some Communities have taken part in the “Bags of Courage” scheme, to knit individualistic bags, scarves, and other knitted goods that can be sold to support the work done in the centre. Many individual Sisters have given donations from their own budgets to support the work.

What inspired the name Women@thewell?

The name women@thewell was inspired by two mutually compatible concepts. The first concept is based on the historical significance of the well, which was central to communities because water is essential to life; it was seen as the woman’s place as women gathered and chatted whilst waiting their turn to draw water; and it was a place of common ground.

The second concept is rooted in the Christian tradition, specifically the Gospel passage John 4 (1-42) where we meet the unknown Samaritan woman at the well. Seen as a social outcast and looked down upon, like many of the women the project aims to support, she was multiply disadvantaged and yet she is the first active apostle indicated in any of the Gospels.

Sr Lynda Dearlove was honoured by the Queen in the New Year’s Honour Lists in 2010 with the MBE. This news was an opportunity to further highlight and raise awareness of the plight of so many women trapped in the world of prostitution.

Women@thewell and the London Olympics 2012

During the planning stages of the Olympics in London, it was noted that the prevention of prostitution and protection of women was paramount. The centre was able to develop relationships with volunteers from All Souls and other Kings Cross Churches who helped during the Olympics. It also resulted in an official delegation from the Brazilian Government visiting W@W and an invitation for W@W to visit Rio de Janeiro with representatives of the Police and the Home Office ahead of their own Olympic Games.

Due to the high profile of this type of work, the centre has been involved in many other efforts to help vulnerable women. Below are a few examples:

The service works with many other partners to bring relief, offering holistic care, and linking women to other agencies. Some of these partners included De Paul UK, Camden Safety Net, Camden Safer Streets Team, Isis, and the Terrence Higgins Trust.

In March 2013 Sr Lynda attended the United Nations Commission on the Status of Women where the priority theme was the “Elimination and prevention of all forms of violence against women and girls”.

Convention on the Elimination of all forms of Discrimination Against Women

In May 2013 CEDAW launched a Shadow Report which had been produced by a coalition of 42 women’s and human rights organisations across the UK. This report was in preparation for the examination of the UK Government by the UN CEDAW Committee in July 2013. Only on 12th November 2020 Lynda was on “Woman’s Hour” on Radio 4 giving a brief interview along with Joanna Moorhead on religious women and the efforts they are making for today’s world.

International Women's Day (March 8) is a global day celebrating the social, economic, cultural, and political achievements of women.
The first IWD was held in 1911 and was supported by over 1 million people. Today it is the focus of many countries throughout the world
and its theme this year is "Choose to Challenge"