Our Community in Whitby have also struggled with the confines of lockdown.  The Community is one that offers care to our Sisters.  One Sister has sent in the positives and negatives as she has seen them and the preparations they are making for Easter.

There was an overriding need for air – to get outside, away from confinement.

Worse – the virus visited us –one and all – Staff too.

While lying on a sick bed – the need, a longing, to hear the voices of family.

Death came calling too – a knock at the door kept bringing news of the loss of another one of our own.

Graveside services only, the first – a double funeral – in torrential rain.

Noticing tiny aspects of nature – a beautiful line of marigolds adorning the back wall of gardens.

Children’s messages of thanks and hope on windows added to the weekly national clapping for NHS and Carers.

Seeing two magnificent arcs of a rainbow – surely a sign of God’s presence at a funeral service held in Whitby Cemetery for our Sisters.

Then as the sisters returned home there was another broader and richer in colour while finally the last one arched over our house – a sign of protection, a rainbow of hope.

To help our Sisters with attending Mass and other special services another Sister sets up her laptop almost daily to allow two Sisters to  follow a Mass during Lockdown.  She also selects other items of interest for them to watch during this time

Who could find the first snowdrop?  This developed into searching for signs of Spring when out on short walks. And so the golden crocus appeared, followed by the purple and the white.  Daffodils, dwarf and tall pushed quickly through the hard earth.  Tiny tulips were next and grape hyacinths too, catkins on trees, together with buds, eventually blossom all hurrying, uplifting to offer new life.

The radiant light in the sky, the evening sun reflecting on buildings all played their part.  The beauty of both dawn and sunsets added to the resplendent scenes.

There was also the sound of birdsong, and the silence of the empty streets – shops closed – no one about except on vaccination days.            Yet in the silence and stillness there was and is a palpable Presence, offset occasionally by the sound of the wind and waves on the shore.

The care and concern people offer one another other, strangers – stepping aside to allow one to pass safely – the simple question ‘Can I help?’ – a spirit of Community and Care is evident.

Indoors jigsaws helped pass the time of day, – some Staff became involved too, on their breaks – and in their generosity brought some they had at home – as there were varying degrees of difficulty!

Lent came early – with the promise of Easter.

Five of us took it in turns to lead variations of the Way of the Cross – one each week – these were enriching.

Polystyrene eggs were decorated for an Easter tree organised by Staff.

As for the Easter ceremonies we will follow suggestions offered by our diocese.

However, there are and will be daily individual ‘displays’, in house, during Holy Week to help with reflection for anyone who wishes to avail of them.

As for this week, Holy Week – our daily displays will cover people and our senses – not exactly together

On Thursday we usually have a symbolic Passover,  Friday – a large wooden cross, nails, hammer,

crown of thorns and on Saturday an Easter Garden with tomb and water feature. 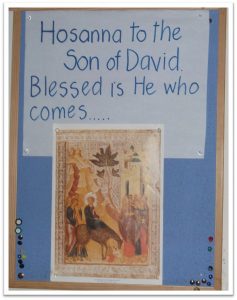