In September 1827 Catherine McAuley established a ‘House of Mercy’ in Baggot Street, Dublin, Ireland. There she and several companions provided food, clothing, housing, and education for many of Dublin’s poor women and young girls. In 1831, with the approval of Archbishop Daniel Murray, she and her first companions, Anna Maria Doyle and Elizabeth Harley, founded the congregation of Sisters of Mercy, the first apostolic female religious order in the English-speaking world, with the house in Baggot Street serving as its first convent.

Upon joining, the Sisters take vows of Poverty, Chastity, Obedience, and promise to provide Service of Those in Need. Therefore, the focus of Mercy Sisters is and has always been towards achieving modern, progressive care, with thought given to spiritual welfare. 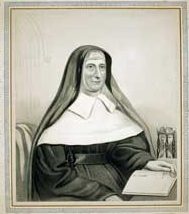 Catherine McAuley (1778-1841), our Foundress, opened the first Convent of Mercy in England at Bermondsey on 19 November 1839 for the education of children and the visitation of the poor, sick, and needy. Following her success in helping the poor in Dublin and as response to the poverty in the Victorian slums of cities, Catherine and her successors were requested to set up Convents in England. During the ten short years of her religious life Catherine made two foundations in England, Bermondsey in 1839 and Birmingham in 1841. Catherine had visited the site for a third foundation in Liverpool in 1841 and received prospective candidates from Liverpool for their novitiate in Baggot Street. Sadly, Catherine died in November 1841, before the Liverpool foundation was made. The Sisters finally moved into the Pugin designed Convent in Mount Vernon Liverpool in August 1843.

Catherine McAuley and a group of Irish Sisters arrived in Bermondsey and on 21 November 1839 Mother Clare Moore (1814-1874) was appointed Superior and six postulants received the Holy Habit on 12 December 1839. In January 1840 Sister Clare Agnew was appointed Assistant. Following a successful foundation, Catherine returned to Dublin on 13 January 1840. 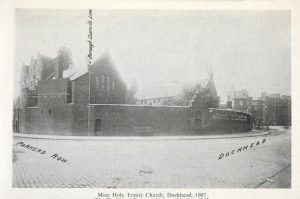 The Convent was designed in the ‘Gothic Style’ by Augustus W.N. Pugin and it was his first purpose-designed religious community building. Pugin went on to design St Mary’s Convent in Birmingham but this time with strict specifications from Catherine McAuley who was famously extremely unhappy with what she deemed was Pugin’s overly monastic approach to the Bermondsey Convent. Unfortunately, on 2 March 1945, a V2 rocket wrecked the presbytery and the Convent. This killed the parish priest, Father Michael O’Riordan, and two of his assistants, Fathers Finbar McCarthy and Stephen Spillane. Father Edmund Arbuthnot was pulled out of the rubble, despite a leaking gas main threatening to explode at any moment. His rescuer, Ted Heming, won the last George Cross of the year.

After the war, the parish of Dockhead was slowly rebuilt and the Convent too which was completed in 1958. However, radical social reforms and new building plans for London led to great changes. The streets around Parker’s Row today would be unrecognisable to Sisters who came to Bermondsey in 1839. Ships no longer unload their goods at the docks. The warehouses which once stored enough food to feed half of Britain have been turned into shops, offices, and expensive apartments. Despite improvements in the lives of the local people, need still exists and the Sisters continue to work with vulnerable people on the margins of society, the homeless, the lonely, and the sick. 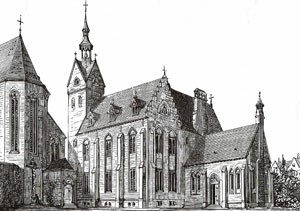 Sisters of Mercy, the Crimean War, and Florence Nightingale

The Crimean War broke out in 1854 between Britain, France, and Turkey against an expansionist Russia. Reports of the infamous conditions for the soldiers and medical staff caused a sensation in London. The War Office appealed for volunteer nurses and this caught the attention of Bishop Thomas Grant, First Bishop of Southwark, who responded by requesting for Mercy Sisters go to the Crimea. A group of five Mercy Sisters left three days after Bishop Grant’s request, including Rev’d Mother Clare Moore who journeyed from Bermondsey. Three more Sisters followed in 1856. A further 11 Irish nurses from Ireland and Liverpool convents also answered the call, led by Mother Francis Bridgeman. The Bermondsey Sisters worked with Florence Nightingale at the converted Barracks hospital in Scutari and won universal respect for their skill and dedication. They nursed thousands of men in wards ridden with rats and lice. During her time in the Crimea, 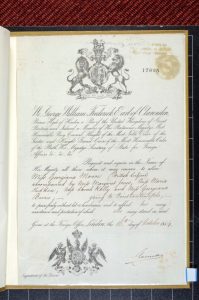 Mother Clare Moore worked closely with Florence Nightingale and the two women formed a strong friendship. Florence herself said in a letter to Clare Moore in 1856:

“…What you have done for the work no one can ever say…My being above you was my misfortune, not my fault. My love and gratitude will be yours, dearest Reverend Mother wherever you go…I do not presume to give you any other tribute. The gratitude of the army is yours.”

Many of the Sisters became ill themselves and two Mercy Sisters from Liverpool died. In 1807, the four Crimean Sisters from Bermondsey who were still alive were rewarded the Royal Red Cross medal by Queen Victoria for their outstanding efforts. They were Sisters Stanislaus Jones, Helen Ellis, de Chantal Huddon, and Anastasia Kelly.