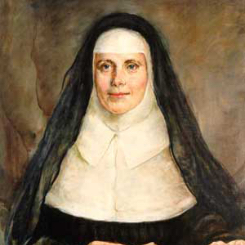 The Mercy Associate movement is inspired by Venerable Catherine McAuley, the foundress of the Sisters of Mercy whose vision was to alleviate the situation of the poor, sick and uneducated initially in her own city of Dublin.

In the 1980s the General Chapters of the Sisters of Mercy promoted the setting up of the Associate groups in various parts of the United Kingdom. These groups were facilitated by interested sisters who invited lay people to join the Association. The first recorded Associate groups were in Oldham, Lancashire and in Colwyn Bay, North Wales. There are groups now as far afield as Kenya and the Philippines as well as the UK.

Originally these Associates were men and women who had some association with the Sisters of mercy, e.g. School, parish, College, University or Hospital.

Since 2000 five youth associate groups have been established in North Shields (Tyneside), St John’s Wood, London, Liverpool (2 groups) and one in the Philippines.

There is a Mercy Associate Commission, the core purpose of which is to promote Venerable Catherine McAuley’s spirituality, preserve the unity of the association, whilst encouraging and supporting creative diversity.

The Commission meets twice a year to review all aspects of the Association, to support and network with Associate groups and to plan National and Regional gatherings and Pilgrimages.