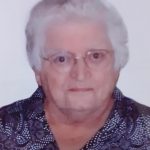 Sr Mildred McNamara – known to many as “Millie” or “Madre Millie” died peacefully on 29th April 2022 in Lima, Peru where she had worked tirelessly since she was first missioned there in 1969.

She was one of four Sisters who were missioned to Peru by Bishop Wheeler of Leeds at that time and they first went to an area called Tupac Amaru, a shanty town with a population of 40,00 – 50,000.

After a few years, Millie moved into another barrio in Monton and lived with the poor in her little dwelling, named aptly, Villa Maria.  Millie worked hard at setting up medical clinics for the poorest and ‘comedors’ or kitchens where food could be available for those in the area.  The people around her realised that Millie would respond to their needs at any hour and they came to love and trust her.  Other Sisters came and worked with Millie for a number of years but Millie became the lynch pin, always there and always responding.

However, in 2018, Millie had a stroke and was taken to the Stella Maris Hospital in Pueblo Libre, far across the city from her little home.  This was to become her home for the next four years as her health gradually declined.  The Missionaries of the Sacred Heart of Jesus had their convent right next door to the hospital, as they had begun it back in the 1940s and so Millie was very fortunate to be given a room in the section of the convent where their own elderly and infirm sisters were looked after.  The family of Flor de Rojas had been faithful companions to Millie in the barrio and they kept up their devotion now in her hour of need.

Millie died on the Feast of St Catherine of Sienna, another strong woman and one who also left a legacy.  We know that Millie will always be held in the hearts of the people in Lima and we rejoice that she was so truly a Sister of Mercy. 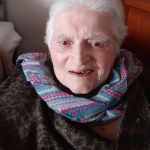