In March, we received an email on behalf of a Sister in the USA who is completing a book entitled Mercy Goes to War: War Comes to Mercy, an account of the Sisters of Mercy serving as nurses in the US Civil war.  Information was requested on one of those Sisters – Sister Gertrude Ledwith.  Fortunately we were able to provide some answers.

Sister Gertrude was born in Limerick on 24 November 1822 and entered St Mary’s Convent, Handsworth in 1847.  She went as a novice to the community at Wolverhampton, was Professed there in 1850 and trained as a teacher. 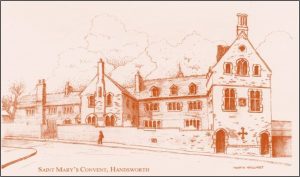 How Sister Frances Warde came to know Sister Gertrude is not known but they were corresponding.  Sister Frances, recognizing the experience and capability of Sister Gertrude, invited her to join the new foundation to Philadelphia as the community leader.  There is an anecdote in the New York archive that records Sister Gertrude accepted and then “dawdled” in the Midlands collecting money and seeking postulants.  When she eventually arrived in New York in 1861, she found that another Sister had been appointed community leader.  Nothing daunted, Gertrude set off to travel south with a small group of Sisters to nurse the wounded in the Civil War.

An extract from the North Carolina Nursing History describes the appalling conditions at the military hospital that had once been a hotel.  The first nine Sisters of Mercy arrived in 1862.  The soldiers had thought these women, all dressed in black, were widows seeking the remains of their husbands. The account continues:

“These were no widows. These were Sisters of Mercy from New York City, Irish women led by Mother Augustine McKenna, who had been educated in a hedge school and had run an infirmary and a home for homeless girls.   An unusually tall, handsome woman, she would explain to people “I am the daughter of an Irish Giant.”

After surveying the filth in the hospital, she informed Kit (the person in charge) she was taking charge and presented the Army with her list of demands which included brooms, tubs, kitchen utensils, castile soap, cologne, dressing gowns, towels, sponges, starch, lamps and better food.  Neither Kit nor the Army liked being ordered around by a woman but an order from Washington soon followed, as did a steamer laden with the goods that had been demanded.  Clearly, the Atlantic Hotel had now been taken in a surprise raid by the Sisters of Mercy.

This was a novelty to the soldiers who had been nursing each other, sort of.  One of the hospital’s patients, a sixteen-year-old private was found screaming with pain because his wool shirt had become encrusted into a festering back wound.  His mates were trying to scrub it free using a rough towel soaked in cold water.  Suddenly he felt a gentle hand take over, applying warm water and soap with a soft sponge.  The shirt came off the wound and the screaming stopped.  Private Hubbard had his face pressed hard into the pillow.

“Who is doing that? came his muffled voice.

“A Sister of Mercy” she said as she dressed his back in soft, old linen.

“What are you!” exclaimed the boy, turning, astonished to see a woman dressed in black with her face framed by a stiff white collar.  She was Sister Gertrude Ledwith.  She patiently explained to him that a Mercy’s job was to help those who suffer. …Private Hubbard finally settled back on his bed, his pain eased.

More supplies appeared.  Accumulating layers of filth were scrubbed from the walls and floors.  A new doctor arrived.  The food improved and meals were served on time.

Army surgeons who had often worked with them in hospitals before the war, seemed to prefer Sisters.  They were disciplined, organized and would calmly volunteer for the dirtiest, most difficult tasks. 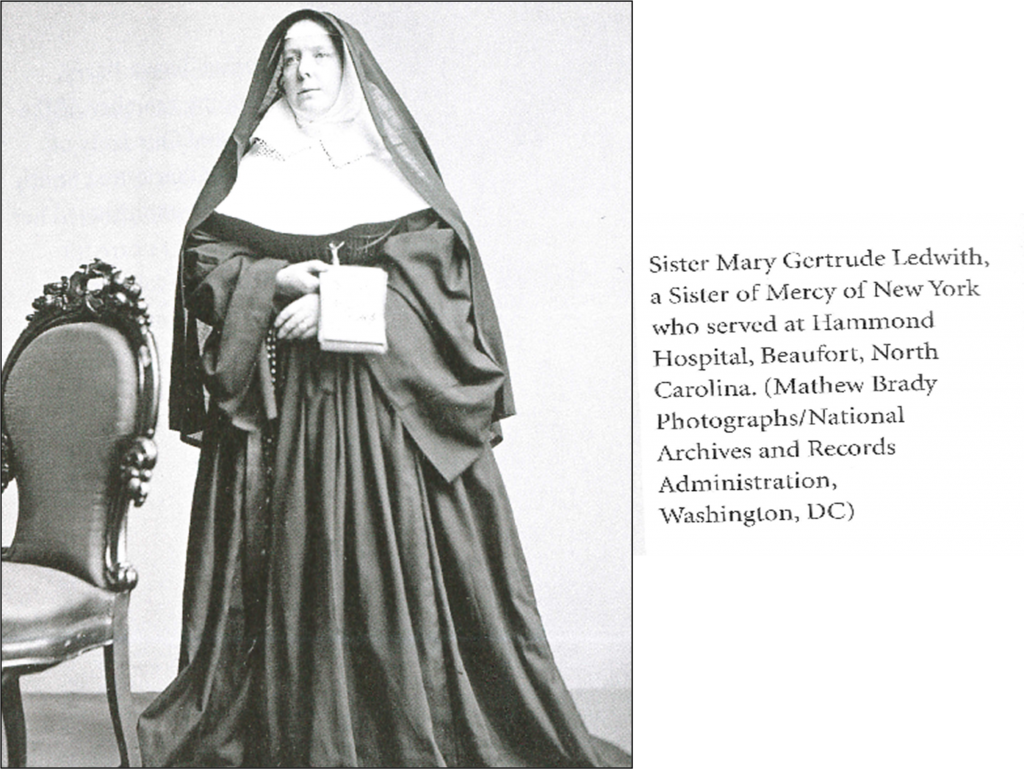 When Sister Philomena mentioned to me that she had been looking into the life of Sister Gertrude Ledwith, my ears were certainly pricked and I was delighted to see a photograph of her finally – to put a face to the name.  Sister Gertrude had come to my attention not long after I began my role as Mercy Archivist when I was told that she nursed in the American Civil War but began her Mercy journey here in Birmingham.  It became a matter of intrigue to discover her traces in the records of the Union collections.  We thought we knew her story, but what trail had she left in the documented Mercy heritage?

Essentially, there are four documents in the Union Archive that speak of Sister Gertrude, and they tell us actually quite a lot.  The first is the register of St Mary’s (Handsworth) Sisters which relates: 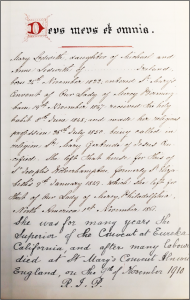 She entered the community of St Elizabeth’s, Wolverhampton, January 8th 1849.’

We find her twice mentioned in St Mary’s Convent annals.  Firstly she is named in January 1849 as one of the party, along with Mother Augustine Cuddon, Sr M. Catherine Wareing, Sr M. Aloysius Stocker, Sr M. Stanislaus Allitt and Sr Magdalen Howard, who were accompanied by Rev. Mother Juliana Hardman to Giffard House, Wolverhampton, to make a foundation there.  We are not told why she was chosen, but the field of labour was thought to be extensive in Wolverhampton.  The Sisters there certainly faced huge challenges, and we are told in St Mary’s annals that ‘the cholera broke out in Wolverhampton soon after the Sisters arrived there, and they at once undertook the duty of nursing those attacked by the dreadful malady’.  Surely ministering in Wolverhampton during a large cholera outbreak must’ve given Sister Gertrude invaluable experience for her later work in the American Civil War.

The educational achievements of Sister Gertrude are also communicated in St Mary’s Convent (Handsworth) annals.  In 1849 the Catholic Poor School Committee in London proposed that young persons should be sent to St Anne’s (Birmingham) to be trained as teachers.  This offer was accepted, and a Normal School was commenced.  Sister Gertrude Ledwith was one of the first candidates of this school, and in 1852 gained a High Certificate.  This made her one of the first Catholic Certified Mistresses in England (see 1852 Class list). 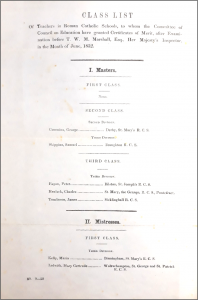 There is one final document in the Union Archive that alludes to the path of Sister Gertrude’s life, though we would have to look to other Archive collections to access any detail about the latter part of her Religious Life.  The profession register of Wolverhampton contains the same information as the one from St Mary’s regarding the entrance of Sister Gertrude into the convent.  However, it takes us further in stating that from St Joseph’s, Wolverhampton:

‘she left for that of Our Lady of Mercy, Philadelphia, North America, 1st November 1861.  She was for many years the Superior of the Convent at Eureka, California, and after many labours died at St Mary’s Convent, Alnwick, England on the 9th November 1910. R.I.P.’

The archives help us not to know Sister Gertrude, but at least to know events in her life that perhaps shaped her.  Not shackled by the same constraints that limited married Victorian women, this is a story of a truly international Sister of Mercy who moved where her talents were needed.

Further Foundations and return to England

(Notes using an extract from “Frances Warde, American Founder of the Sisters of Mercy” by Kathleen Healy, The Seabury press, New York, 1973 and information from the Humboldt County Historical Society, Eureka, California.)

With her usual insight, Mother Frances Warde knew that a foundation of Sisters of Mercy in Philadelphia would possess tremendous possibilities for growth and expansion.  She determined to do all that she could to give it strong roots.  The Convent of Mercy in Manchester was flourishing, and she decided to give the Philadelphia house a larger contingent of Sisters than she had ever granted to a new mission: six professed Sisters and four novices.  And with her characteristic selflessness, she would send to the new Convent the best qualified Sisters she could.  She had continued meanwhile, to invite candidates for the religious life to come from Ireland and England to her Convents in the United States.  At the time of her negotiations for the Philadelphia foundation she was corresponding with a very capable Sister of Mercy in Wolverhampton, Staffordshire, England, who desired to serve in the United States’ missions.  Sister Gertrude Ledwith had entered the Convent of Mercy in Birmingham, England in 1847.  She was a well-educated and experienced woman, whom Sister Frances considered ideal to serve as first Superior of the promising Philadelphia convent.  Sister Gertrude accepted the invitation to assume leadership of the Sisters at the parish of the Assumption.  The other nine Sisters destined for the new mission were all younger than Sister Gertrude.  Most of them had received their religious formation under Mother Frances herself….

Mother Frances had promised Father Carter to open the parochial School of the Assumption in September.  As the summer progressed, no word was heard of the arrival of Sister Gertrude Ledwith from England.  Communication across the Atlantic was not always a simple matter in 1861 and Sister Frances may have concluded that Sister Gertrude was either delayed or had changed her mind about coming to America.  In any case, Sister Frances could not delay the departure to Philadelphia.  She appointed her Director of Novices, Sister Patricia Waldron, in place of the British Superior.  It is difficult to know precisely what Mother Frances’ intentions were, but it would seem that Sister Patricia’s appointment may have been a temporary measure until the possible arrival of Sister Gertrude.  The ten Sisters left for Philadelphia with Mother Frances on August 21 and arrived August 22.  A Philadelphia newspaper noted that Mother Frances planned to “remain within the new Institute for about three months.”  Normally, she remained at her new foundations for one month.  It is possible that she had received, meanwhile, some word from Sister Gertrude in England and planned to remain in Philadelphia to install her as Superior after her landing in America.

Shortly after Mother Frances’ return to Manchester, the Philadelphia Sisters received a communication from the Superior of Sister Gertrude Ledwith’s Congregation in England.  Bishop William Ullathorne of Birmingham required a signed agreement concerning the release of Sister Gertrude to the Diocese of Philadelphia.  This Sister spent so much time preparing for the journey and arranging to bring British girls as postulants to America that she did not leave England until November.  On arriving in the United States, she was greatly chagrined that she was not to be the Superior in Philadelphia.  Eventually, however, Sister Gertrude became an outstanding Sister of Mercy with a varied career of service:

Father Patrick Henneberry had purchased and asked the Sisters to run an academy for young ladies – St Joseph’s Academy.  Sister M Gertrude Ledwith remained superior from 1871 – 1880…[and] was re-elected superior in 1883 and again in 1892 and remained superior until the closing of the school in 1901.  During this time, she appears to have gone back to England for two years (1898 – 99).  After the school closed, there was a series of lawsuits over property between the bishop and the sisters.  Eventually the money was divided and the group of five remaining nuns disbanded.  Sister Gertrude returned to Alnwick, England as she had been invited to join the community by Mother Evangelist Costello.  She spent the last years of her life in Alnwick quietly and reflectively and she died on 9th November 1910 and is buried in Alnwick Cemetery along with the other founding members of the Alnwick Community.

Strangely enough, if Mother Frances Warde had inadvertently diverted Gertrude Ledwith from service as first Superior of the Philadelphia Sisters, all those years before, she opened up to her a broad apostolate in America, before her return to England to end her days. 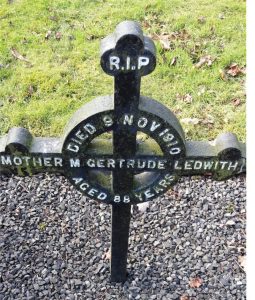 Sister Barbara Jeffery, Institute of Our Lady of Mercy