This article has been sent to us by Marie Noel Keller, an American Sister of Mercy, who has studied the short life of Sr Mary de Sales White.

Among the earliest Sisters of Mercy, my favourite sister after Catherine herself, is Sister Mary de Sales White. She is my icon of discipleship. The Carmelite poet Jessica Powers calls Abraham an unwavering nomad, musing:

“I love Abraham, that old weather-beaten
unwavering nomad; when God called to him
no tender hand wedged time into his stay.
His faith erupted him into a way
far-off and strange. How many miles are there
from Ur to Haran? Where does Canaan lie,
or slow mysterious Egypt sit and wait?
How could he think his ancient thigh would bear
nations, or how consent that Isaac die,
with never an outcry nor an anguished prayer?

I think, alas, how I manipulate
dates and decisions, pull apart the dark
dally with doubts here and with counsel there,
take out old maps and stare.
Was there a call after all, my fears remark.
I cry out: Abraham, old nomad you,
are you, my father? Come to me in pity.
Mine is a far and lonely journey, too

Powers could have written this poem about the journey of Sister Mary de Sales White as well. Who was this wonderful disciple of Jesus, and what can she teach us? A look at her life in Mercy will substantiate my claim.

Jane White was born in County Wexford, Ireland in 1813. She entered Baggot Street on June 7, 1836, receiving her habit and the name Mary de Sales on January 25, 1837, the same day her older sister, Teresa White, professed her vows. Both sisters were among Catherine’s earliest companions, and they travelled with her on numerous occasions. Professed in January 1839, de Sales was one of two sisters Catherine lent to the Bermondsey Foundation in England in 1840 when Bishop Griffiths requested seasoned sisters be sent there. Indeed, the day after they left, Catherine confessed to Frances Warde: “I feel quite deserted this morning—dear Sister de Sales has been my mother for some time, plaiting my coifs, etc., etc. May God Bless them [she and Sr Xavier O’Connell] and receive the offering to His greater glory.”

A few days afterward, Catherine wrote de Sales a chatty letter in which she describes some of the antics happening at home, meaning to give her a laugh. She concludes by asking her to write a monthly letter about herself.  Thirteen days later, another letter follows in response to a letter de Sales posted her. So much for a once monthly correspondence! Indeed, by the time de Sales returned home, Catherine had written her eight additional letters.

The most quoted of Catherine’s letters, sent right before Christmas, uses the metaphor of dance, a natural staple to the Irish! Here, Catherine is at her pastoral best; as both de Sales and Xavier thought they would be away from home a shorter time, than it appears they would be. Thus, she presents God as our dancing partner; asserting that it is only when we allow God to lead, that we will go forward, no matter how difficult the steps! Catherine’s Lenten letter gives her further discipleship advice: “The simplest and most practical lesson I know, my Dear Sister de Sales, is to resolve to be good today, but better tomorrow. Let us take one day only in hands at a time, merely making a resolve for tomorrow, thus we may hope to get on, taking short, careful steps, not great strides.”

When next we hear of Sister de Sales, she is on her way home after being in England more than ten months. Catherine has begun to fail, and de Sales becomes, as Catherine writes to her sister Teresa White in October 1841, “my constant affectionate nurse,” which she was until Catherine died on November 11.

In 1843, Sister de Sales was sent as Superior from Baggot Street to the newly formed foundation in Liverpool. Begun during Catherine’s lifetime, it was completed after her death. At first, de Sales was lent to the convent, but she was gifted there permanently soon afterwards. While there, she also ministered to the city’s poor Irish Laborers, who found themselves exiled in Liverpool because of the Potato Famine. How they must have been strengthened by one of their own, who knew them. It was a mutual exchange. Later she took care of Bishop Thomas Youens, the Priest who asked Catherine to send sisters to Liverpool. He was dying of typhus, and in lifting and turning him, this ‘constant affectionate nurse’ ruptured her spinal cord. After Bishop Youens’ death, Sister de Sales was taken to Ireland in the hope of regaining her health, but when such outcome was deemed unlikely, she (who according to Catherine “couldn’t wait to go home”) chose to return to Liverpool on a bed-chair. She died three months later on 5th October 1849, of a spinal ailment, complicated by rheumatism which left her paralyzed. She was 37 years old!

Today there is very little mention of her in the annals. Unfortunately, she seems to have become eclipsed by Sister Liguori Gibson, a native of Lancashire, who was elected Superior when de Sales resigned her position a few months before her death in 1849. While she rests in Old Swan Cemetery outside of Liverpool, there is much I can still learn from her, for she danced with God until the end of her life. How many miles from Dublin to Liverpool, I ask her? “Ultimately,” she responds, “it doesn’t matter. God is in the lead. So, taking short, careful steps, not great strides, all you need to do, is to follow…”.

I think, alas, how I manipulate
dates and decisions, pull apart the dark
dally with doubts here and with counsel there,
take out old maps and stare.
Was there a call after all, my fears remark.
I cry out: de Sales, old nomad you,
are you, my sister? Come to me in pity.
Mine is a far and lonely journey, too. 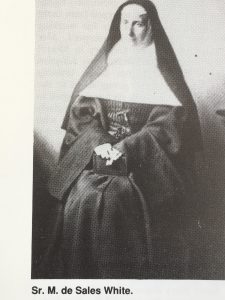