Historians are nowhere without their sources.  And archives are significant places for many of us who do research on modern history. My favourite work place is the archive – research days are days of anticipation. What documents will I see today? What will they tell me? Will they answer my research questions? Or will they lead be astray? (And yes, there is something enjoyable about being led astray by the sources!)

But, of course, the year of Covid was a year unlike any other. And for many historians, it was a year without the usual delving into the archives. As many of the archives I use can be found in religious houses, it was also a year without those tea-time or hallway conversations with sisters. This too informs my understanding of meanings behind the documents I read. I owe a personal debt of gratitude to the encouragement of one special Mercy archivist, Sister Marion McCarthy who introduced me to the riches of the Bermondsey archives in 2000.  We often spoke, with cups of tea in hand, under a printed copy of Catherine McAuley’s final instructions ‘Be sure to have a comfortable cup of tea for them when I am gone’. 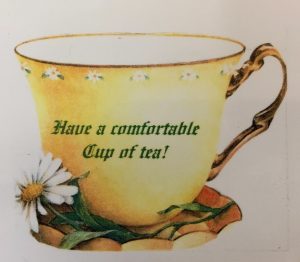 So, like many academics, I had a bit of ‘making do’ this year with what notes and photocopies and digitized images I had collected in years past. Commissioned to write a chapter on the changing post-war religious ministries of women religious, I found myself delving into my Mercy files (digital and paper), where I found a small collection of anniversary and promotional brochures that have been very useful. These commemorative brochures, often written collaboratively, document a shared image of religious life, self-perception, and the continued building of community. 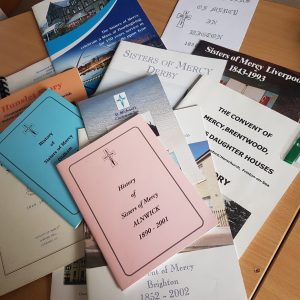 Reading through the brochures there is, of course, stories of diminishment in the closures of houses, in the bittersweet celebrations of the last sister (usually the head teacher) leaving a school. But there is also evidence of a ‘second chapter’ and a reminder of the excitement of new ministries born out of diminishment and informed by the Second Vatican Council’s call for renewal. The Religious Life Vitality Project completed in 2015 affirmed that female religious institutes maintained a ‘strong sense of resilience as their most significant and enduring form of vitality’. New and re-newed religious ministries demonstrate this resilience.

Many of these ‘new’ ministries had links to nineteenth-century ministries: sisters worked as parish sisters and taught catechism but sisters also took on roles as prison and hospital chaplains and volunteering in their local communities.

I want to focus briefly on two Mercy ministries, re-born and born of renewal and responses to the needs of the local community and both emphasising how homelessness and advocacy became a core ministry for some Mercy communities.

Homelessness has been and remains a key focus of state and philanthropic attention. In earlier times, homeless provision was often the responsibility of local and state bodies such as the parish and the Poor Law. Religious bodies responded to the inadequacies of this provision by creating charities such as almshouses, refuges, and asylums that housed the homeless.  The 1948 National Assistance Act was a national response meant to eliminate the need for such private charitable action, but homelessness remained a pervasive issue.

After the Second World War, it was often identified as an urban experience linked to the post-war shortage of housing and the dislocation of returning soldiers. In the 1960s, Cathy Come Home, Ken Loach’s 1966 BBC documentary of a young woman and her two children’s journey to homelessness, exposed one young family’s downward spiral.

Providence Row was re-purposed again and again over the century to meet the needs of the marginalised. When nearby Mercy-run St Joseph’s School closed in 1972, the sisters re-developed the property into additional flats and hostel rooms. Expansion was funded by sales of property and charitable benefactions, but this was not enough to ensure the future of the work. Partnerships with the Charity and Housing Association and the London Borough of Tower Hamlets provided local government funding.

The Providence Row complex by the 1980s expanded services to address some of the causes of homelessness adding drop-in-centres, medical care, counselling, rehabilitation, and referral services. Providence Row collaborated with other agencies such as St George’s Men’s Care unit, Spitalfields Crypt, the Salvation Army de-toxification Unity, and Bow Single Homeless Alcoholic Recovery Project. These services and collaborations addressed some of the interrelated causes and outcomes of poverty. By the 1980s, homelessness was blamed on unemployment; sisters defended those who used their services by refuting claims that they were not ‘dossers’ or ‘layabouts’ and noting they were ‘highly skilled and highly intelligent people, worn from going the rounds of Job Centres and agencies’. By this time, Providence Row was no longer solely managed by the sisters though a Sister of Mercy remained on the Board of Directors. They are credited as founders of one of London’s most creative homelessness charities offering a holistic approach to ‘tackling the root causes of homelessness’.

Brochures and the annual reports are very important to the teasing out of this history, but another important source has been the anonymous ‘gentle author’ of a blog that features life in the East End of London. This blog can ‘people’ the history of Providence Row. One 2009 blog post featured Sister Bridget and Sr Bernadette at work at the Providence Row Day Centre on Wentworth Street. The blog also illustrates the work at Providence Row using Moyra Peralta’s photographs, including one of Sister Paul handing out clean shirts in the 1970s and 1980s. Another blogpost tells the story of a former occupant who stayed at the Providence Row shelter with her family in 1958 and whose 2012 oral history can be found at Bishopsgate’s Library.

This model, of religious and lay expertise and collaborations with local and state funders, became commonplace for other Mercy projects around the country. Another anniversary brochure introduced me to the Derby communities’ post-war activities.  Derby’s Mercy community educated Catholic schoolchildren from 1849 opening branch houses in Belper, Carlton, Atherstone, Alvaston, and Swadlincote expanding their network of parish schools, private schools, infant schools, and secondary schools into the mid-twentieth century. Changes in government education legislation with diminishment of community numbers led to divisions, mergers, comprehensivation and closures of schools.

As sisters began retiring from teaching, they developed new initiatives focusing on the needs of the local Derby community.  Sister Richard Croston was in her thirties when she initiated a partnership between the Sisters of Mercy, Derby Cathedral, and the Derby City Fellowship of Churches to create what became the Padley Day Centre (1985) for the homeless. This ecumenical collaboration included a Craft Centre which extended provision to people with learning difficulties and mental health issues and later the Peartree Craft shop (1990) which sold the crafts and goods made at the Centre. Services expanded include welfare advice, counselling, basic medical care, and an ecumenical prayer group. The Derby Sisters of Mercy after completing Beechwood House (1979), a retirement home for aging sisters, built on a nearby site low-cost housing for the elderly. They opened Mount Carmel Care Home (1985) and later Beaumont House (2012) providing housing for the aged and those with extended care needs. St Philomena’s Primary school which closed in 1992, re-opened in 1997 as the McAuley Court Housing Project (run by Walbrook Housing Association) for the homeless.

These new ministries, similar to Providence Row, were collaborative ventures with sisters working alongside professional and volunteer staff to serve the needs of the Derby community.

So, while I would have liked to have spent more time in the archives, this experience of Covid has taught me to examine more closely alternate resources.  These two examples demonstrate how Mercy post-war ministries were rethought as some communities moved away from the institutionally-based work that had been so intrinsic to their mission and identity to new works encouraged by serving the ‘people of god’ and social justice issues.